Dear friend Munson, it has been a long time since I had heard from you before, but I am glad to hear from you and to hear that you was well. It found me enjoying a very good health. We are putting the shell into the Rebs this morning and now and then they give us one but we have got used to that. We don’t care no more for them than we do for a lot of little boys, they do the wildest throwing shells that I ever saw, they will get them too high or too low shells too. You wrote in your last letter that you was a shooting squirrels and you said you supposed I was shooting Rebs, you are right on that for we made a charge and then halted and laid in line of battle all day and they throw shells at us all day but didn’t do much harm. I was laying behind a pile of rails and I looked way out in a big field that I was behind in the words and I saw the weeds and brush a moving along and they got closer all the time. Pretty soon I saw a big 12 pound solid shot a coming a rolling a long on the ground and it rolled up and it went against the rails like Sam Hill but did not break them down and there was a shell busted right behind me and there was a pile struck right behind me not more than a foot from my back and knocked dirt all over me and I got up and I run like a white head down into the woods and got behind a log and I was lying on a little round pole and I had hardly set down when they threw  another and it buried before me and there was a piece struck the little pole that I was sitting on, and last night I was laying down on the ground and they shot 2  guns and I heard the shells a coming and got my head down and one of them went into a crowd of hogs and busted and killed three and wounded eight and the other came at me and I was laying behind a little tree and it sent the tree down and there busted about 4 feet over my head and that night they pulled steak and run and in the morning we took after them and have got them in about 2 1/2 miles of Atlanta, we have got them in a hard place, now on the other side ( of the letter) we will show you how there lines and ours lay, they lay this way and we can give it to them on the left and the right and the front. Well I will close by saying write often, please send me a book that is a pamphlet as something to read. I don’t care what it is and I will pay you for your trouble so good by from your friend Sovain E Wood (with the 18th U.S. Infantry).

Hurrah for old Abe and the Union every time! 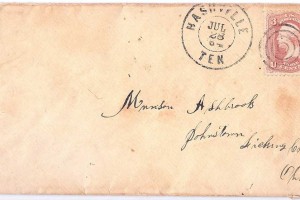 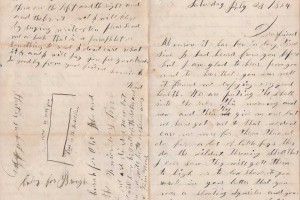 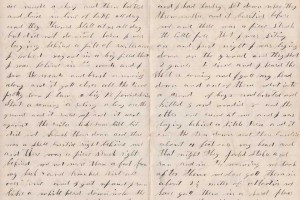